August 19th – Kevin Carroll: “How can you make play a competitive advantage in your success journey?”

When did we develop the notion that play is ‘kid stuff?’ When did it become our truth that play is what we do only on weekends and vacations in deference to ‘responsible work’ all the rest of the time? In this Curiosity Conversation with speaker, change agent and Play Master, Kevin Carroll, he demonstrates how PLAY is not only fun, healthy and essential for well-being, but actually a competitive advantage to achieving whatever success we desire. Bring back the red rubber, grab your sneakers, jump onto this podcast, and be reminded of what Plato taught 1500+ years ago:

“Life must be lived as play.” 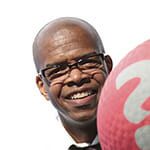 Raised by his grandparents in the greater Philadelphia area, Kevin spent endless hours at the neighborhood playground where he found his “calling” — a red rubber ball. His subsequent pursuit of sport and play (aka his “red rubber ball”) plus his love of books has led Kevin to becoming an author, a speaker and a social change agent.

Kevin is an author of three highly successful books published by ESPN, Disney Press and McGraw-Hill. He has helped turn creative ideas into reality for organizations such as Nike, Starbucks, Walt Disney, Target, Proctor & Gamble, Mattel, the National Basketball Association and many others.

Kevin has dedicated his life to advancing sports and play as a vehicle for social change and success. He was honored to address the United Nations as part of the UN Year of Sports for Development and Peace in 2005 and to host the Beyond Sport Summit & Awards from 2009 thru 2012 featuring Archbishop Desmond Tutu. He is an ongoing advisor and active supporter for many global social innovation organizations. In 2013, Kevin was named by SUCCESS magazine as one of 19 “SEERS – changing the world!” Kevin’s blog