July 15th – Jake Miller: “What has your life prepared you for?”

Many of us go in search of a life purpose as though it is a hidden treasure for which we would love to discover the map. What if the map has been in front of us all the time? In this Curiosity Conversation with Jake Miller, he talks about how the simple act of looking back at our life with fresh eyes and asking “What has my life been preparing me for?” can be powerfully instructive. 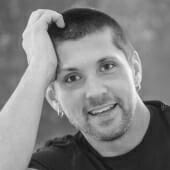 Jake Miller first encountered the practice of yoga as a student of theatre and dance in 1997. After several years of ‘dabbling’ and few of serious study, he began teaching in the Vinyasa-style in 2004. In 2007 he completed his 250-hour Teacher Certification at Wake Up Yoga in Philadelphia. Continuing studies have included Sanskrit and Sound Yoga with Manorama of Sanskrit Studies, Living Tantra with Pandit Rajmani Tigunait of the Himilayan Institute, and Thai Yoga Bodywork with Michael Buck of the Vedic Institute and Saul David Raye of Ritam Healing Arts. Jake is now co-director of Blue Banyan Yoga School and Studio.